Please review the attached website to fully understand the recent changes to the PRS Bands:

Field Day for 2017 was held at the GCARC Clubhouse on Jun 24th – 25th.  We had a nice visit from Darrell Davis KT4WX our WCF Section Manager.  Always great to see and talk with him.  We had a total of 18 members and guest during the event.

The Rap River Run was a great success. The Gulf Coast Amateur Radio Club wishes to give a big thanks to all that volunteered.  Thanks!

Please arrive no later than 6:00am at Sims Park or your assigned location. The first race begins promptly at 6:30am.

The Rap River Run for 2017 is complete. The GCARC would like to thank all our volunteers for their service.  Everyone did a great job! We are looking forward to next year.

If you have any question about this years race please contact our President, Barry N2NVP at president@gulfcoastarc.org.  These are opportunities where we get to put our Amateur Radio skills to work.  Again, thanks for your support.

Up and Coming Events:

Volunteer opportunities are needed for several committees.  If you have some time please consider donating your time and expertise. A club such as ours is only as good as our volunteers that donate their precious time.  Help support our club.

Please contact Barry N2NVP at president@gulfcoastarc.org if you wish to be a part of one of these committees or other areas you’d like to participate in.

The GCARC Annual Club Picnic was successful.  We had to change the date several times do to important events. We had to come up with creative ways to cook Hot Dogs and Hamburgers. In spite of all our problems a good time was had by all. We had good food, music and most importantly friendship and brotherhood.  I have to say once again the food was fantastic.

If you weren’t able to attend this year then plan for next years Annual Picnic.  Anyone with pictures please send to webmaster@gulfcoastarc.org for inclusion on the website. Pictures will be uploaded soon.

Coaxial cables are the most popular form of transmission line for getting our signals to and from our antennas. There are many types of cable to choose from and it can be confusing to chose the best one. In this article, we’ll cover the most common choices of cable to get you started. We’ll focus on the most popular cables, with 50 ohm impedance to match the output impedance of our transceivers.

At one time, RG-58, RG-8X and RG-8U were military standards but now these terms are used rather loosely and refer primarily to the size of the cable. Accordingly, I added “type” to the term to indicate that it is not a precise standard.

All three of these cable types will handle 100W or more at frequencies below 500 MHz, which covers most ham transceivers.  If you are running more than 100W, you should check the power specification of the cable you are using. Times Microwave Systems has a very handy online calculator for coaxial cable specifications, which I used for the calculations in this article.

All coaxial cables will attenuate the signal as it travels down the cable and the signal loss can be significant. For example, 3 dB of signal loss means that you lost half of the transmit power as it propagates down the line. This loss applies for both transmit and receive… we’ll get less power out to the antenna and we’ll have less signal showing up at the receiver.

The cable loss will be determined mostly by the size of the cable (bigger is better), the dielectric used in the cable (the insulator between the center conductor and the shield) and the frequency of operation. As an example, consider a 100 foot run of cable for use at 146 MHz, which is high enough in frequency and a long enough run such that we’ll see some significant losses. According to the Times Microwave calculator, 100 feet of RG-58 style cable produces a loss of 5.5 dB, which means that only 28% of the power gets through the cable. (The percent power delivered is shown as Cable Run Efficiency in the calculator.) This is not good, so we would rarely (never?) want to use RG-58 for that long of a cable run.

Changing the able to RG-8X drops the loss to 4.5 dB, which is only a minor improvement. (4.5 dB loss corresponds to 36% of the power makes it through.) However, using RG-8U type cable decreases the loss to 2.4 dB (58% of the power makes it through the cable), so clearly the larger cable size has an advantage. Now let’s change the dielectric. LMR-400 is a popular cable that has the same diameter as RG-8U but with a lower loss dielectric (Foam PE). The 146 MHz loss through 100 feet of this cable is 1.5 dB, or 0.9 dB better than ordinary RG-8U. A loss of 1.5 dB means that we still lose 30% of the power.

Now let’s see what happens when we change the frequency of operation. If we use our 100 foot run of LMR-400 on the 20m band (14 MHz), the loss is only 0.5 dB. This means that 90% of our signal power makes it through the cable. You can use the Times Microwave System calculator to try out different combinations of cable length, cable style and operating frequency.

There are a few other cable specifications that you may be concerned about, depending on application. Cables with solid center conductors are less flexible than those with stranded center conductors. The dielectric material and the outer insulating jacket can also affect the flexibility of the cable. For portable operations, I make it a point to get cable that is rated “flexible” because it is easier to handle and deploy. Direct burial cable has a durable outer insulation that will withstand being buried in the ground. The type of outer shield used in a cable can vary widely, with some cables providing much more shielding and isolation than others.

This is a quick introduction to choosing the right cable for your amateur radio station. I hope it points you in the right direction. Its always a good idea to buy quality cable from a reputable supplier and to read the specifications for that exact cable type.

Hello fellow club members.  We now have a newly revised Yahoo Group Reflector to share your thoughts and comments on a variety of topics.  If you have any questions or problems please contact Chris AA4CB.

Be sure to check it out.  Listed below is the URL for the group:

Welcome to the only national organization representing Amateur Radio in the US. As an ARRL member you support the ranks of thousands of other ham radio enthusiasts shaping the Amateur Radio service today. If you consider yourself an active ham… you need ARRL now. If you are not presently an active ham… let ARRL help you.

As a member of the ARRL, here are some of the benefits you will enjoy:

Take the next step in being an active participant in the future of ham radio.  Join or Renew your Membership in the ARRL today through the Gulf Coast Amateur Radio Club (an ARRL Affiliated Club)!

ARRL Affiliated Clubs receive a commission for every new ARRL membership and renewal they submit to ARRL Headquarters. 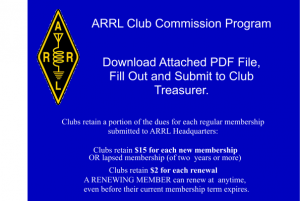 Yes! check your membership card’s expiration date today.  The club gets money from the ARRL for all new memberships and renewals.  Contact Barry N2NVP, President GCARC

The FCC announced in July 2015 it was closing the offices and trimming up
to 44 positions to better reflect technological advances and in the face of
budget reductions. The modernization plan creates rapid response teams to
handle special enforcement issues. The FCC says the so-called Tiger Teams,
based out of Columbia, Md., and Denver, will be dispatched within 24 hours
of an interference crisis.

The restructuring plan has the National Association of Broadcasters and
the Society of Broadcast Engineers worried that the cuts in the field will
limit the FCC’s ability to mitigate interference complaints and leave
potential holes in the enforcement fence.

Before the plan could be implemented the FCC had to reach an agreement
over the projected job losses with the union representing FCC Enforcement
Bureau field employees. The National Treasury Employees Union has been a
vocal critic of the overhaul plan, openly questioning the commission’s
ability to safeguard radio spectrum going forward. An FCC spokesperson
confirmed on Thursday that the displaced FCC agents will have the
opportunity to apply for vacancies in the remaining field offices if a
vacancy exists.